VINCI, more than a century of projects serving daily life and mobility.

The history of the VINCI Group, heir to hundreds of companies gradually assembled in a convoluted process, goes back to the 19th century. In 1899, two engineers from Polytechnique, an elite French engineering school, Alexandre Giros and Louis Loucheur, founded Société Générale d’Entreprises (SGE), which became VINCI in 2000 following its merger with the GTM Group.

VINCI’s two core businesses, concessions and contracting, already existed in the 19th century, the era of the industrial revolution that brought profound change to our societies, transforming them from an economy based on agriculture and crafts to one based on commerce and industry.
The first concessions were in electricity systems. Group companies built dams and took on operation of transmission and distribution grids. Tramway lines were also developed as concessions, as were regional railways. Later, water and sewer networks became another pillar of VINCI’s business: GTM (Grands Travaux de Marseille) was set up in 1890 to build and operate the sewer system in Marseille.

The concession-construction model that has structured the company since its inception is a specifically French system. It underpinned the development of several large building and civil engineering groups that expanded in the 20th century, driven by urbanisation and the expansion of transport and energy systems. As major projects flourished, engineers built infrastructure to support a new world.
With the spread of the automobile, a new business activity emerged: roadworks.

Very early on, the Group’s companies focused on the international market (Russia, Asia and Latin America) while in France, following the nationalisation of the electricity companies and railways in the 70s, new concessions were created. First came motorway concessions with the creation of Cofiroute in 1970: the government called on private-sector companies to catch up for the country’s lag in motorway construction. Then came car parks, as cars became too numerous to be parked on the street in urban centres. The Group’s companies then built a series of major bridges and tunnels under concession contracts, including the Prado Carénage tunnel in Marseille, the second Tagus bridge in Lisbon and the Confederation bridge in Canada.
Concessions were then applied to stadiums, including the Stade de France, which was built in record time to host the World Football Cup in 1998. Moving beyond concession projects, the Group’s companies also expanded operations in all the contracting business lines:
They extended their area of operations in Europe and beyond; they broadened the range of their expertise and built comprehensive business lines that included engineering, production and project management.

In 2000, SGE and GTM merged: the new Group adopted the name VINCI and became a world leader in concessions and construction. Each of VINCI’s two core businesses underwent spectacular growth:
In concessions, VINCI created VINCI Park in 2001, which became a world leader in parking. In 2006, VINCI, which already held the Cofiroute concession, took over the ASF and Escota networks and set up VINCI Autoroutes to become the leading motorway operator in Europe. In 2011, VINCI branched out into high-speed railway concessions with the South Europe Atlantic high-speed line linking Paris and Bordeaux in two hours, one of the largest infrastructure concessions introduced in Europe.
In 2015, VINCI became one of the world’s top five airport operators, with VINCI Airports operating 34 airports in France and around the world.

In contracting, VINCI Energies broadened the range of its expertise through organic growth and a proactive external growth policy. The acquisition of Cegelec in 2001 accelerated its international expansion. In 2014, VINCI Energies acquired Imtech ICT, which specialises in information and communication technologies and operates in several European countries, as well as Electrix, a major player in electricity transmission and distribution infrastructure in Oceania. VINCI Energies offers expertise in its four business areas: energy infrastructure, industry, the service sector (building equipment and maintenance) and information and communication technologies.

Eurovia extended its range of business activities to cover railways with the acquisition of ETF in 2008 and expanded its quarry activity by acquiring Tarmac in 2010. In 2011, Eurovia acquired Carmacks, a Canadian group of companies that build, operate and maintain road infrastructure.
Thanks in large part to its research and development centre, inaugurated in 2003, Eurovia serves as a partner for local and regional authorities, focusing on innovation to boost road safety and environmental protection. With a portfolio of more than 160 patents, the Eurovia R&D centre has developed about 50 new products and processes since its inception.

VINCI Construction is undergoing strong growth in the three pillars that form its business model: its networks of local subsidiaries in France, Europe and Africa and since the acquisition of HEB Construction in 2015 in Oceania; its major complex projects business, carried out throughout the world; and its highly international specialist business lines, which took on a new dimension with the arrival in 2007 of Soletanche Bachy operating in ground technologies and Entrepose operating in Oil&Gas.

VINCI will continue to expand by continuing to pursue its strategy based on the excellent fit between its concessions and contracting businesses, accelerating its international expansion while maintaining its focus as a private sector company serving the public interest. In a rapidly changing world, VINCI operates at the point where mobility, urbanisation and environmental issues meet. Its ambitious innovation policy helps drive its operational performance.

In 2012, the VINCI Manifesto is published. The Manifesto summarizes VINCI’s commitments to social and environmental responsibility. It covers all issues that contribute to the Group’s overall performance.

The VINCI Group is present in more than 100 countries and employs more than 194,000 people.

VINCI Immobilier Polska was established in 2017, as a result of an initiative of the French company VINCI Immobilier SAS and the Polish company Warbud S.A. The residential developer’s team is made up of people who know the specifics of the housing market very well, having participated in the development and sale of thousands of apartments in Warsaw and other local markets in Poland. Thanks to this experience, the first two residential projects in Warsaw – the Bonifraterska 10a Residence and the Wilanowska Housing Estate – have been launched for sale in a short time, and other projects are in the pipeline or in the process of obtaining building permits.

The majority shareholder of VINCI Immobilier Polska is VINCI Immobilier SAS, which is based in Paris, France, and has developed residential, hotel, and office projects for more than 20 years.

The second shareholder of VINCI Immobilier Polska, Warbud S.A., is one of the largest general contractors and one of the most recognizable brands in Poland. In over 25 years of activity of Warbud S.A. has completed almost 600 contracts in all sectors of construction – building, infrastructure, industrial, military, health care, and public-private partnership projects.

The name VINCI pays tribute to the universal genius of Leonardo da Vinci, artist, scientist and engineer, and stands for the humanism, inventiveness and technical resourcefulness with which we identify. Leonardo, a towering figure of the universal cultural heritage, is known throughout the world. His name reflects the Group’s European roots.

The logo is made up of “connectors”, which were used by the cathedral builders to fasten stones together. It symbolizes sustainable construction designed to last and its contemporary design also suggests the world of networks and information technologies as well as the interconnection of the Group’s expertise to serve its customers’ projects.

The most interesting projects developed by VINCI group

VINCI group companies have implemented many interesting, challenging, or groundbreaking projects. It would be difficult to select just one of the most interesting or spectacular. We invite you to view a gallery presenting selected projects which the companies of the VINCI group have completed on their own or in cooperation with external partners. 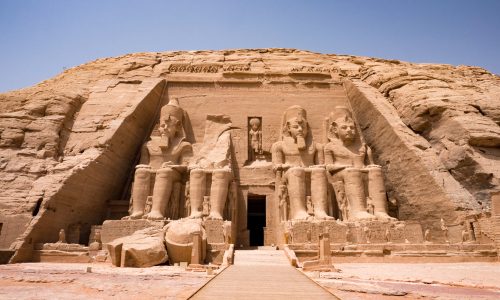 The relocation of the Temple in Abu Simbel, Egypt 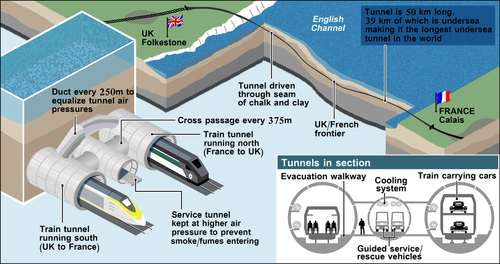 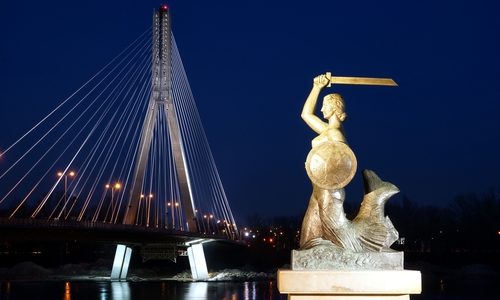 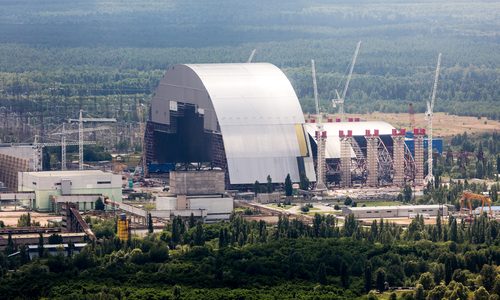 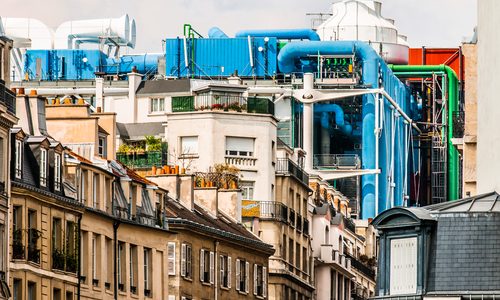 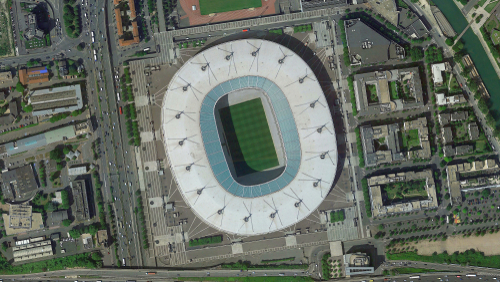 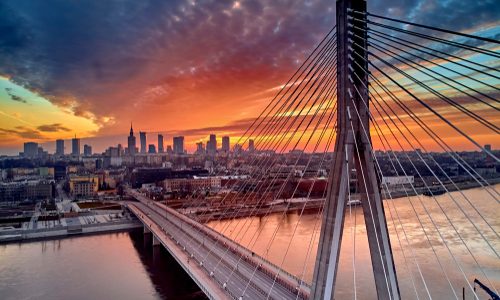 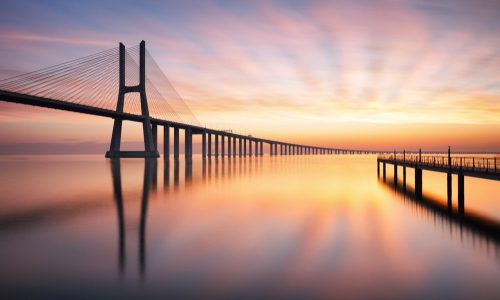 The VINCI Group has been present in Poland for many years, mainly as the owner of the construction industry leader Warbud S.A., but the VINCI “family” in Poland comprises as many as 12 companies providing specialist services.